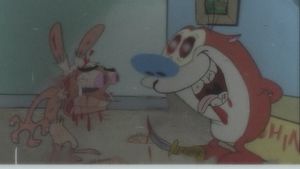 A still from the episode

As you should know, Ren and Stimpy was a cartoon show that aired on Nickelodeon in the early 90s. I was about 7 when I was first introduced to it and ever since I was hooked. I loved the gross out humor and adult oriented jokes. But the 90s were over and I had to grow up, but the show always stuck in the back in my mind. I'm 29 and, I hate to say it, flat broke just like my parents were. We lived in the bad part of town, and every Christmas they'd feel really guilty about not being able to afford presents. We didn't even have cable growing up. I had to get my Ren and Stimpy fix at my Aunt's house. I'm now living in a cheap, one room apartment. The place doesn't even have a bed, just an air mattress in the middle of the floor. I've been a bit depressed lately. My girlfriend Esme just broke up with me. I figured that a healthy dose of nostalgia would help clear my mind.

As I said, I don't have the money to waste on old cartoons and games, I have to focus on the "essentials" for survival like discount Rice-A-Roni. I suddenly had an idea: search the internet for episodes of classic shows. I knew not to stream episodes for free (I had a bad experience with a virus once) so my only option was to buy a DVD. I checked Amazon.com, but they denied my card. I returned to the search engine and found something that intrigued me. It was the complete Ren and Stimpy series for $7.99. I was a bit hesitant at first because of the cover. It was a stock picture of the duo, stretched and pixalated in order to fit the box size. It still looked shady, but I bought it anyway.

It came about two weeks later. I made sure to be around my mailbox frequently because my neighbors always steal my mail, usually trying to take pizza coupons or whatever you have. I opened the package and it seemed strange. The box appeared the way it had online but the receipt was odd. It had the seller's logo and the rest of the paper was blank. I dismissed this as simple laziness and put the first disc in my player. Instead of opening with a few previews and a menu the show just started abruptly. I was concerned at first, but my fears were soon put at ease. I had a big, stupid grin on my face, spending hours of laugh-filled nostalgia in front of the idiot box.

For the next several days my routine was the same: Wake up, get dressed, go to work at Olive Garden, and go home to watch Ren and Stimpy until the break of dawn. I got onto disk 8, which was about the middle of season 3, a week later. I hadn't paid attention to the disk art when I first got the set, but I don't see how I could have missed it. The first disk was both Stimpy and Ren standing happily together. The second disk was the same. As was the third, fourth, fifth, sixth, and seventh. The eighth disk had the identical artwork of Stimpy, but not Ren. I rubbed my eyes and stared back at it. Stimpy was standing alone. His left arm was still stretched out as if his friend was still there. I flipped to disk nine, ten, and so forth and it was the same: all Stimpy and no Ren.

I put the disk in the player. The screen was dark and black. I thought my TV had burned out so I went to turn it off and was proven wrong. There a loud, high pitched screech . I jumped back in my chair, startled out of my mind. The screen was still black, only there was now a low and ominous electrical humming noise playing. The show's logo faded in, the text was a brilliant scarlet red. Stimpy was looking silly as usual, his large tongue hanging out, but Ren was once again absent.

The episode's title card appeared. It read "Stimpy". I was mortified, to the point that I couldn't get out of my seat. I had to watch. The episode seemed normal after that, but the picture quality was poor, as if it had been transferred from a VHS tape. Ren walked into the kitchen sleepily after getting out of bed. He steps into one of Stimpy's hairballs and begins to shout humorous substitutes for obscenities, such as "gosh darn it" and "Oh cluck". Stimpy innocently walks in the room and asks what is the matter. Ren complains about the hairball and repeatedly calls Stimpy an ignorant moron. He then comically slaps him around. Stimpy grabs a rolling pin of the counter and beats Ren over the head.

Ren falls to the ground and begins to bleed thick, dark blood. Ren moans slowly in pain and moans:

Stimpy looks down on him with a low, heavy frown. His eyes looked extremely detailed, as if video of real, saggy, bloodshot eyes had been inserted over the drawing. Stimpy hissed between gritted teeth:

Ren opened his mouth to speak, but Stimpy hit him with the rolling pin again, leaving his face bloody and disheveled. Ren whimpers and begs for Stimpy to stop but he goes on anyway.

The next shot is the two in silhouette Stimpy standing with the rolling pin and Ren lying on the ground. Stimpy repeatedly whacks Ren with the rolling pin. Each time during the screech of Ren being beaten, there is, at the same time, a sickening crunch. After about two minutes of this the screaming ended. Stimpy grabbed the body and began to laugh. A long, deep breathy laugh. He looked toward the viewer and said "Mea blandeque coruscant prurit". The screen faded to black.

I didn't know what to do. It was so horrifying that I just passed out. I woke up the next morning in a cold sweat. Was last night a dream? Am I insane? These thoughts repeatedly crossed my mind. I opened my eyes and heard the theme music playing. I shivered, goosebumps began crawling up my spine. This episode appeared to be normal. There was no gore or violence. The cartoon played as if Ren had been erased from history. Even if characters were supposed talk to him there was just a period of silence followed by a typical comedic response.

I went to get my camera in order to document the phenomena. When I returned to the TV I was taken aback. I reached for the rewind button and the player started to smoke. Thick, gray sludge oozed out of the disk drive. I was was shocked. I put out the fire within minutes and went to the library to settle things out. I went on the computer to contact the seller. I suddenly remembered: the receipt was blank and had no contact information. I sunk in my chair and began to sob. I returned to my home and destroyed the rest of the DVDs, the player, and even the TV. In the months since I've found no evidence of this episode beyond my own recollection. Perhaps that is for the better.

Retrieved from "https://trollpasta.com/w/index.php?title=Ren_and_Stabby&oldid=244862"
Categories:
Cookies help us deliver our services. By using our services, you agree to our use of cookies.