Have you ever wondered what happens if the creators of SpongeBob SquarePants got rid of Gary the Snail? The creators made a test episode called “Goodbye Gary,” an episode not supposed to be released to the public.

My dad works at Nickelodeon studios, and mainly worked on “SpongeBob” and “The Loud House,” but he sometimes worked on other shows. “Goodbye Gary” was darker than the usual SpongeBob standards. Since my dad worked at Nick studios, he would sometimes bring home DVDs of the newer episodes and some that were test episodes, so he could edit them, to see if there were any errors in the episode, or to change anything that seemed wrong. When he got home, he put a DVD on the kitchen counter, and told me that he was running out for a while. He never mentioned the DVD, mostly because it looked like he was in a hurry. After he left, I grabbed the DVD off the counter, put it in my DVD player, and sat on my chair in my room to watch the episode.

I was not ready for what I was about to watch. 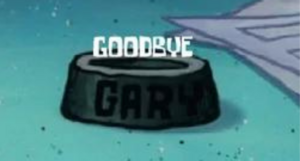 The title card for "Goodbye Gary"

The episode started out with a title card with a pet bowl with the name “GARY” and above it read “Goodbye,” which read out “GOODBYE GARY.” Sad violin music was playing in the background. Beginning “credits” rolled normally, and then it went to a shot of a pet hospital. The camera zooms in on the hospital, and goes to a shot of SpongeBob sitting in, what looked like, some kind of waiting room. He had bags under his eyes and looks nervous.

The episode went into a flashback scene, and showed SpongeBob watching TV in his living room. A loud noise was heard from the kitchen. He got up and walked into the kitchen. He gasped and ran to the source of the noise. It was Gary, foam coming from his mouth. He was having a seizure. He looked over to where he found Gary, and saw the bowl, upside down, with brown snail food all over the kitchen floor. The last part of the flashback scene, was SpongeBob running out of his Pineapple house, Gary in his arms. The camera goes back to the waiting room, with SpongeBob still sitting with bags under his with a nervous expression. A fish in a doctor's coat came out and walks to SpongeBob. “Is Gary alright, doctor?” SpongeBob says, trying not to stutter.

“The snail food that he congested had rat poison inside of it. He had ate too much of it and died. I’m sorry, SpongeBob,” The doctor says in a depressed voice, putting a fin on SpongeBob’s shoulder.

SpongeBob begins to yell "NOOOOOOOOOOO!" So loud, that it almost made me go deaf. While this happened, the camera panned outside of the hospital.

The screen faded to black.

The screen came back, to SpongeBob sitting in his house, with Sandy and Patrick with a couple of Krabby Patties. But, something was different about SpongeBob. His skin was darker like it was fading.

“He lost Gary.” Sandy said, “Give him some time. Here, SpongeBob.” she gave SpongeBob a Krabby Patty. “This’ll cheer you up for sure!”

As Sandy put the Krabby Patty in SpongeBob's hand, it switched to SpongeBob’s perspective and showed the patty in his hand. It slowly morphed into a small Gary.

It switched out of SpongeBob’s perspective, tears started dripping from his eyes and he said, "Oh Gary! I'm so sorry! I wish you didn't get poisoned!" As he was saying this, Sandy and Patrick tried to tell him to be quiet, but they failed miserably. Squidward bursted through the door and screamed,

SpongeBob then went silent. Patrick got up and yelled at Squidward.

“Do you have any idea what happened?! Gary died last week! SpongeBob is sad about it and you come in here to silence him?!” That was very unlike Patrick’s character.

Squidward came back at Patrick, yelling at him. “Gary died? Why couldn’t it be SPONGEBOB who died?! The world would be a lot calmer and I would be happier then I am now! Or why couldn’t it be YOU who died, Patrick??!! We have enough retards in Bikini Bottom alone!!”

That line was very dark, especially for Squidward. They’ve never said retard in the show before.

After he said that, SpongeBob got up from his chair.

This is where it went downhill fast.

“If you don’t get the HELL out of my house right now, Squidward… I'm going to kill you!!” Spongebob screamed at Squidward, acting completely serious. Squidward didn’t seem scared of him screaming.

“Oh yeah, what are you going to do, hit me with your TEARS?” Squidward said, laughing after he said that.

SpongeBob started running angrily towards Squidward, leaped up into the air, and jumping onto him. He started punching Squidward in the face, clawing at him. Sandy and Patrick tried to get SpongeBob off of him, but he just kept attacking him, pushing the two away when they tried to pull him off. Sandy threw a rolling pin at SpongeBob, knocking him off of Squidward. When SpongeBob got punched, a realistic punch sound effect played.

Squidward had a bruised nose, scratch marks all over his body, pieces of his shirt torn off, and a black eye. Squidward then yelled, “Get away from me you psychopathic sponge!” and ran out of the pineapple house. He ran into his own house and boarded the entire building up. After this was over SpongeBob then went ran upstairs to his room while panting with anger, and slammed the door shut. Sandy and Patrick ran upstairs and Sandy told him to open his door. SpongeBob then said, "No, Sandy! I will stay in my room forever!" Sandy just told Patrick, “We should probably leave.” He agreed and they left. A time card appeared reading, “Two weeks later” and then it transitioned to Sandy and Squidward in front of SpongeBob’s house. Squidward’s nose was finally healed from the bruising, but he still had some injuries on his body.

“You think SpongeBob will be okay with me being here, Sandy?” Squidward said in a calm voice.

“Yeah, Squidward. He’s probably over it by now. Maybe he's not so worked up like last time,” Sandy said.

“But he hasn’t been to work in 3 weeks. I’m not sure about this, Sandy,” he said. Sandy knocked on the door, but it slowly creaked open. The living room was dark, with the only light being the static of the television screen. “SpongeBob?” Squidward yelled.

They decided to go upstairs to see if he was in his room. “Hey SquarePants! Are you in here?!” Sandy said. Once again, no response.

Squidward knocked on the door.

Squidward did as she said. When he opened the door, he gasped and froze. “What is it Squidward?” Sandy said, very confused. Squidward started stuttering but finally got the word out. “SpongeBob!!” Sandy looked into the room and screamed, “Oh My God! SpongeBob!!”

The camera panned to a shot of SpongeBob lying dead on his bed with a butcher knife in his forehead. He was bleeding hyper-realistic blood from where he got stabbed in.

That was the final shot of the episode, as the credits rolled.

I was in shock.

I didn’t know what to think. Was this supposed to be an actual episode? I had no idea what to say. I took the DVD out of the player and put it back where it was before. My dad never found out that I watched the DVD. I believe that SpongeBob episode is an alternative version of the current running episode, “Gary Come Home.”

Retrieved from "https://trollpasta.com/w/index.php?title=%22Goodbye_Gary%22_A_SpongeBob_SquarePants_Lost_Episode&oldid=279926"
Categories:
Cookies help us deliver our services. By using our services, you agree to our use of cookies.