A Close Encounter with the Tails Doll 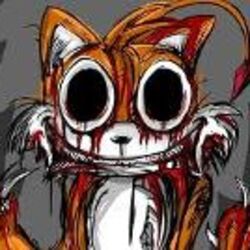 One late afternoon, I invited some of my friends to play Sonic R. As we turned on the Sega Saturn we were excited for our racing tournament. As we were at the Character Select screen, I chose the Tails Doll for humor. Most of my friends were laughing as they chose Metal Sonic, Metal Knuckles, Mecha Eggman and Super Sonic. Later I won all the races since I was am expert at this game. We realised time flew by so my friends left.

PlayStation 3. Me and my friends played a few races online and a message popped up to my screen coming from a user called 'Tails Doll'. I opened it and it sayed "Thank You". "For what?" I sent him a message back to this user. 'Tails Doll' then sent another message saying "You won 1st place with The Tails Doll, I was watching you." I got freaked out for a second thinking something was watching over us as we were playing Sonic R. Another message from 'Tails Doll' saying "Can YOU feel the Sunshine?" and sent me a friend request but i didn't accept it because I don't even know who this guy is.

I sent all my friends a message saying "Did you see anybody watching us because I got sent a message from a User called 'Tails Doll' saying he watched me win 1st place with the Tails Doll." My friends sent back messages saying they don't know and with a "O.O" I searched 'Tails Doll"s profile but it said the profile doesn't exist. I immediately turned off the PlayStation 3 and used my laptop to go to the PSN forums. I made a thread about my message encounter with the Tails Doll. Users were replying they also reported getting messages after playing Sonic R with Tails Doll. An Administrator deleted the thread calling it "Nonsense". It was 10 PM so I went to the Bedroom, turned off the lights and slept.

When I woke up the next morning I found a little paper saying "Dear Richard, I am going to kill your friends to show them that they are fools, Sincerely THE DOLL." There was a little blood stain where THE DOLL was read. I freaked out and threw it in the trash and had a 1,000 mile stare until I got to school. I ran inside the classroom and screamed to my friends that they will be killed. The teacher thought I was the Class Clown and I punished me with Lunch Detention for today.

At Lunch Detention, one of my peers said that they heard of the Tails Doll after I told them my encounter with it. What made me get chills in my spine is that he told me I'm the Tails Doll's "vessel". Meaning that I pleased the Tails Doll by playing as him in Sonic R. The moment after he said that, the fire alarm rang and we evacuated the school. Smoke was coming from the 3rd floor and it was a real fire. It was coming from my classroom.

I came home early do to the fire, I told my parents about the fire but not the Tails Doll. My father told me that my uncle and my cousins are coming. Luckily my uncle was a retired veteran so I might have some protection from the Tails Doll for now. A few hours later I told my cousins the entire story and they didn't believe me. Saying that it was a good scary story, but this is reality...

Suddenly my cell phone was ringing and it was my friend saying he was having a party. I got permission from my parents and I headed off to my friend's house. As I got there we had a great time fooling around, eating like hell, and watching fights of drunk men. After a while a doorbell rang, the music was so loud we couldn't hear it, so the doorbell rang continuously until I noticed the sounds and opened it. It was my older brother and so he joined the party.

I had a sleepover at my friend's house since it was too late to go home. I woke up at 5:00 AM that morning and found a doll that looks like the Tails Doll from Sonic R. Since I find no interest in dolls I gave it to my little sister when I got home. My guard was down thinking that the doll conspiracy was finally over. I read my dad's newspaper and I jumped out of my chair when I saw the headlines. It read: "Fire started in Eisenhower Middle School by unknown entity, 3 injured". This unknown entity sounded like the Tails Doll and I became paranoid once again. I decided to be a temporary paper boy to end my boredom after breakfast.

An hour later all the papers were the delivered and the days after were quite casual with no school. As I checked the mailbox for letters from my classmates, I stumbled upon a yellow envelope which is quite unsual. I ripped it open with curiosity and it was from 'Your Secret Killer'. It read "My dear friend, I know where you live, I will not kill your friends but burn their houses instead for even more suffering. Will you play with me?". I ran to the nearest trash can and threw it away and I attempted to clear my mind.

Late that night, several fire trucks came to several houses and I realized that letter was actually telling the truth for once. School reopened the next day and what happened last night made it to Fox News that morning. As I entered the classroom when I came to school, everybody was paranoid just like me. And when school was over, as I walked home, I found a paper saying "I will see you, Richard." on the sidewalk. Then, I believed this Tails Doll was actually real. 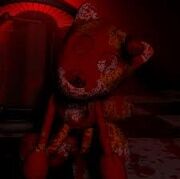 I ran as fast as I can, when I stopped I saw fresh blood dripping down a storm drain. I suddenly became sick and disgusted by this horrific site. I ran even faster and was inside my home and I locked the door tight. Something was poking on me and so I turned around...nothing was there. I ran upstairs to my room, the door locked for no reason, nothing was inside. The lights went out for no reason, I heard loud footsteps coming from the stairs. A red light appeared, the lights turned on. It was the Tails Doll!!

It told me in a demonic voice "I will show the error of your ways." It took out a knife but turned around and floated outside, I closed my eyes in horror as it was killing innocent people. It came back saying "Are you happy, knowing you can feel the sunshine?". It got a huge machete and was ready to kill me as well. I locked the door, and dropped down from the window. With luck, I landed on the ground.

The Tails Doll was furiously slashing at the door, a piece of the door flew out of the window and the Doll's dark eyes were glaring at me. It threw the knife and it almost hit me. It found a chainsaw and told me it was doing a "sacrifice". I jumped through numerous fences but it was too fast, it has a slight cut from the chainsaw. Dripping with blood, I ran through an alley and floated straight toward trying to slice me into two. Before it was going to kill me, I found a wooden cross and shoved it in front of him. He burned like it was a bomb and exploded.

I limped my way back home with the chainsaw and told my siblings an unbelievable story.

Retrieved from "https://trollpasta.com/w/index.php?title=A_Close_Encounter_with_the_Tails_Doll&oldid=283718"
Categories:
Hidden category:
Cookies help us deliver our services. By using our services, you agree to our use of cookies.