A shitty Undertale Pasta I made when I was 12

A sprite of Patience I just made

(This should go without saying, but this pasta contains spoilers to Undertale so if you don't know what happens in Undertale don't read this)

This pasta was based off an idea I had in a Youtube comment section, when someone had a theory about what would happen if Chara had died on impact when falling into The Underground, with Asriel finding Chara's dead corpse. Someone mentioned that it's the kind of stuff from a creepypasta, and that gave me the idea to write a creepypasta. Which I never finished. While I don't have the original creepypasta anymore, I still remember a decent amount of it word for word, so I typed what I remembered done and posted it here. Enjoy. Or not. I don't care. 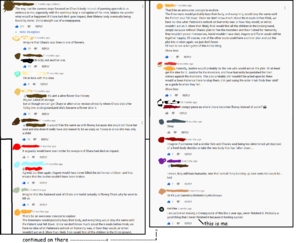 The comment(s) that inspired me to write this

So one day I opened Undertale to do the genocide route because I'm heartless, but something was off...in the intro, Chara was laying on the flower bed, in a pool of blood. Blood, in Undertale. THIS IS NOT OKIE DOKIE! What was weird was that the camera just stayed there on Chara's dead body. It didn't pan upwards, it just stayed there...Anyways, after I had reseted my save file and started the genocide route, things were...off. There was what looked like dust and blood splaters everywhere, and when I tried to grind for EXP, enemies didn't spawn, but my LV still went up like I had killed them. When I went to the room where you get the Toy Knife, on the left the Toy Knife wasn't there...but on the left was a girl who I will call Patience. Here is what she looked like:

Patience was sitting down, with a bloody knife in her stomach, while she was holding the oddly clean Toy Knife. I decided that that was enough and that I should close the game and just play a few rounds of Among Us to get my mind off it.But I couldn't close the game. I tried everything, I even tried to turn off my laptop, but it wouldn't turn off. So I decided to play the game. I interacted with the dead body, and it's head raised, a red glow appeared in it's eyes, and it smiled. Then it cut to black, before a voice, that sounded like Patience's voice saying:

Then it sounded like she was crying, but it slowly turned into laughter...

Then the Chara jumpscare that appears at the end of the genocide route when you choose not to destroy the world happened, but with Patience. But on the last frame...Patience's sprite looked like it was crying. I was scared, but relieved since the Chara jumpscare causes the game to crash, but instead of the game crashing, it went back to my last save point in the ruins. I went back to the room with the Toy Knife, but Patience was gone. I went to Toriel's house, but I heard screaming, and Toriel wasn't there. I went down the stairs and saw a pile of dust where Toriel would normaly be.

And that's what I did finish. And remember. I posted this onto a reply section of a comment on Youtube, but I then deleted it realizing how stupid the story was. If you wanna make a better, or at least decent version of this story that's actually finished, you can. Also, the part where Patience starts crying and it slowly turns into laughter is based off of the end of Chapter 3 of Bendy and the Ink Machine, where Alice Angel sounds like she's crying, but it slowly turns into maniacal laughter, before she drops the elevator at the speed of very fast speed.

and here's the link to the video with the comment that inspired this shit pasta ok time break my fingers for the 5th time today: https://www.youtube.com/watch?v=e49AZXawr2w&t=46s

Written by KellFire
Content is available under CC BY-SA

Retrieved from "https://trollpasta.com/w/index.php?title=A_shitty_Undertale_Pasta_I_made_when_I_was_12&oldid=277037"
Categories:
Hidden category:
Cookies help us deliver our services. By using our services, you agree to our use of cookies.