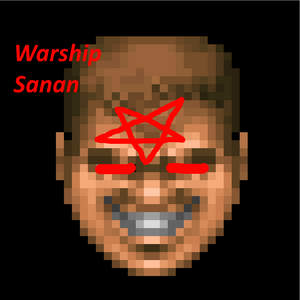 THIS IS IT! THIS IS HOW IT LOOKED!

Opening it, it was just the usual. There is my character, delivering the dong unto Sakaki. I changed the speed so that the "excitement" meter finishes quicker, to trigger the orgasm animation. Instead, the moment it finished, it just suddenly went back to 0% like nothing happened. I tried again, and it worked the second time. Problem was, the orgasm animation wasn't triggered. It flashed an image of a dead goat, and then changed to a side scroller. The title screen said "Warship Sanan", and I was so scared that I shit myself, excrement pouring out of my chocolate starfish, a deluge of miasma exploding out from beneath my cheeks.

After I brought myself together and changed my pants, I decided to push on, in spite of what happened. The curiosity was too much, and I decided to click "play". In it, I played as Sakaki. A cat walks up to me, and introduces the story. "Welcome to Sheol", said the cat. "Enjoy your stay."

It was at that point I decided to walk to my left, and open a door. In it, I met the first boss, the Pseudogod Voluspa Unclitoris, who's a giant vagina. "That was quick", I thought to myself. I brandished the knife from my inventory, and attacked the boss, to no avail. He killed me with one hit, then the screen started flashing black and red, and at the end the words "YOU'RE ASS IS ALL MINE NOW!!!!" came up, and my browser crashed.

This time, it switches to Sakaki, naked still, but standing up. Here, I hear her actual voice actor, or at least someone who sounds like her. She holds up a sign that says "YOU ARE DED, MATTHEW!" and says "Well, you've reached a bad end, haven't you?" At that moment, I hear a scream from my mom's room upstairs, and see her, stabbed to death and battered. On the wall is written "I told yew :)"

And then a skeleton popped out and raped me to death with its bonecock.

Retrieved from "https://trollpasta.com/w/index.php?title=Azumanga_Daioh_the_Hentai_Animation_666_Gaiden:_The_Hottest_ASS_in_The_Seven_Seas&oldid=241015"
Categories:
Cookies help us deliver our services. By using our services, you agree to our use of cookies.