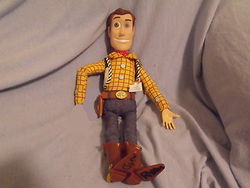 The Woody doll with one of its hands missing.

I've been a Toy Story fan ever since I watched the Pixar shorts and trailers for the first movie. I thought the toys were funny. I got a kick out of watching Sarge and his comrades stumble across surfaces with their plates attached to their little green legs. I loved it all.

When the second and third movies came out, I worked overtime to get tickets because I was that crazy about the movie. After Toy Story 3, I had stopped thinking about it and moved on.

About a month after Toy Story 3 had moved onto DVD and Blu-ray, I went to buy a copy on the internet. After searching for twenty minutes, I found an advertisement for a box-set with four movies. I couldn't remember a fourth movie, but I bought it anyway. I paid only $10 for the thing, so it didn't really matter to me.

About a week later, I had received the DVD's in an unmarked package, with only the send address on a white sticker and one word written on the top of the box, "TOYS" in messy writing. I brought it inside and took a knife to the tape and it came off easy as pie, and pulled out the movies. In the package was a DVD collection of Toy Story and its sequels, a black DVD case and an old, musty Woody doll with its right hand missing. I tossed the box, now only holding the doll, out on my porch.

I popped the DVD in the black box into my DVD player, and I saw Andy running around with Buzz and Woody. He was laughing and playing in the yard and I thought to myself, "Alright, I got an extra short. That's cool," and I sat down with a cup of Instant Ramen and began to watch the film all the way through.

Andy was playing in his room with Buzz and Woody. Then all of a sudden, he had stopped laughing. Screamed for one second, then picked up Woody and Buzz without care.

He then proceeded to walk toward his door. He opened the door and stepped into the hallway, walking past his sister Molly, who at the time was still an infant. He laughed a playful laugh, then kicked Molly in the stomach. She squealed and Andy just laughed like he didn't care.

He walked out his front door, walked into an empty lot and threw the toys in the grass and yelled, "You're nothing to me!"

Woody and Buzz jolted alive and ran after Andy. Then, as they crossed the road, both of them got hit by a passing car, pushing them farther from Andy's home than before.

Woody screamed at Buzz and then they both started crying. Woody then pressed the purple button on Buzz's helmet, retracting the face shield. Then in an instant, Woody pulled off his pull string and whipped it around Buzz's neck and strangled him to death.

The screen then faded to black, then only to fade into a video of a little boy looking in the grass of his yard to find Woody, laying there covered in dirt with his hand missing.

The boy had took it home to give to his father saying, "Daddy, can you fix it?"

The father smiled and said, "Yes." He then took it to a small room with a computer.

He threw the doll into a box and labelled the top, "TOYS" in messy writing. The same writing as on the box.

Retrieved from "https://trollpasta.com/w/index.php?title=Lost_Toys_-_Toy_Story%27s_Forgotten_Prequel&oldid=284392"
Categories:
Cookies help us deliver our services. By using our services, you agree to our use of cookies.