From Trollpasta Wiki
Jump to navigationJump to search
Author's note: This does not take place during the events of Bye-Bye, Dark. But if you want a less cliche story, check it out.

Before I finalized Pixu's World, I made a pilot called Little Baby, which is a copy of the Greeny Phatom episode of the same name. But there was a version that was accidentally made by a mysterious figure who was a "fan" of my pilot. I have heard that he is actually a demon from hell who wanted everyone to suffer. He tried submitting his version of the pilot he called "The UNAired Pilot" and said that he made it with me (Aleph), and Disney did not know he didn't make it, but they viewed it and nearly loved it until they saw the real pilot.

It all began when I made a doodle with Robert Stainton. I have decided that I wanted to make a cartoon at this point, so it might be obvious why Pixu's World was made. I made a pilot and put it on a VHS tape. 15 years later (which is today), I found the original version of the pilot episode I made, but it said "The UN-Aired Pilot" instead of the actual title, "Little Baby". I still decided to watch it, but I really shouldn't have. 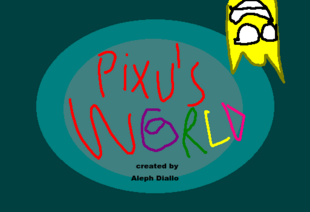 The original title card for Pixu's World. The only difference is that Pixu has a colored outline and that the background for the title card is blue-green in the pilot.

The intro is normal, but has no sign of Cartoon Network, ABC, or anything, and not Nickelodeon. Not even Disney out of all this shit. It also doesn't drag on for too long. For some reason, it says I created it. Though this is true, I didn't make this pilot. 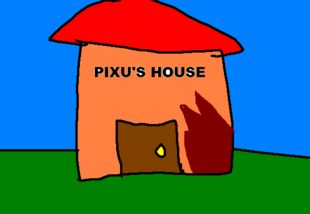 Pixu's house in the episode. 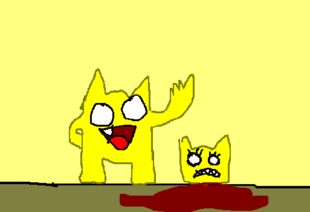 Pixu's house is (unexpectedly, but not scary to me cuz it was obviously going to be different) bloody and his sister, YellowDragon (real name is Wendy), is gone. We see Pixu with YellowDragon's head in his hand. He says, "Oh, hi! Didn't expect you there! I'm Pixu! Let's do something fun, and that's watching VHS tapes!"

The episode then continues as normal, until when we get to the point where Pixu chases Dr. PBS, we see Dr. PBS saying this:

We then cut to Pixu, holding a knife. he then catches up to Dr. PBS and then stabs him. Dr. PBS then screams painfully. Pixu then has red eyes for a single. Damn. Frame. I am not kidding.

The episode continues as normal until the elephant scene. Of course, the elephants are drawn badly, but Pixu rips them to shreds eats their remains and brains and sucks up their blood, leaving skeletons. Pixu runs to the Tiny Loser Chamber and kills everyone inside, including Brush (who was made in 2020 by director of the afromentioned Pixu's World, Berayah Jones), who says, "SHIT! NOOOO!" before he gets killed. Then, Pixu of course, eats their remains.

He kills his parents, both in terrible ways.

Pixu's mom just gets turned into Mondo Butter and Pixu eats it all in one sitting with Blood Maple Syrup on some meaty pancakes. The pancakes and blood syrup may have been YellowDragon's remains and blood.

Pixu's Dad is thrown to the ground, shot by a red laser blast 7 times, and tries to escape, but fails and Pixu scratches him until he bleeds, throws him off a building, blinds him, makes him inaudible and deaf, blasts him again, stabs him, shoots him, makes him paralyzed, gets him lit on fire, and finally rips out his heart and eats it, and then Pixu rips out all of his organs and stuff and eats all of them. Is he a cannibal? Is this a joke? Is this all a dream? WHY THE ABSOLUTE EVERLOVING MOTHERFUCKING HORSE SHIT DID I LET THIS SLIP BY ME?!?

Then it shows an animation of his true form, and he is red, has red bloody eyes with white pupils, 8 monster-sized spider legs, no arms, 666 eyes (you can only see 2 if yo don't look closely), and has tentacles and spikes out of his back. He slowly walks up to the screen.

Then the credits pop up. The text is red and everything just says "Pixu is your god. You will die in 6 days."

The copyright date is © 1996 Walt Disney Television Animation. All rights dead. Disney declined this one, for a good reason.

I don't remember making this version at all. It must have been a demon or it actually was Pixu. I would later just turn him into a normal yellow cat instead of a shape-shifting dragon/demon in October of 1996, fixed the pilot in a few months, sent it to Nickelodeon in 1998, and they accepted it, and I have never made this mistake since the episode. I have kept the video, though.

I tried deleting the video today. Nothing worked. I just got a TrustedInstaller error.

I tried using Adobe Animate today. It brought me to Pencil2D, which opened this Pixu.pclx file that none of us ever had.. This also happened when I tried opening Flash CS4.

I deleted the .pclx file but it kept reappearing.

I tried to make some Roblox GFX, but I couldn't. Everything was just replaced with Pixu.

Recently I got a letter with 100 bucks inside. But it said this Fgwhgadese text:

Here's your money, mortal. I hope you die in a fire. Hey, at least let me eat your soul and remains.

I burned the letter and saved the bill for a physical copy of Flash MX. Of course, I got it.

I have also grown to hate my job. Everything is just stressful. I have decided to quit my job so I don't have to suffer. Later I went to Texas (the restaurant, not the state) and got some chicken. The chicken breast was shaped like Pixu. I ate it anyway.

I have noticed on Vidlii, SubRocks, Newgrounds, and YouTube that someone or something found the video and called it : Pixu's World : The Lost Episode. I have reported the videos uploaded by the person. The username is Pixu666.

This user must have also hacked my local ABC station, because it aired on ABC 7, interrupting the news. I am glad no one saw it.

I think Pixu's fake pilot version's soul is haunting me by trying to get me to bring him back. I am declining it but he always seems to reupload the episode under a new username. Please help me. I might even need to call Ghostbusters, if they existed. Just please, get rid of him.

I also finally fixed Flash and Animate. I made a video warning people of Pixu's World. And, surely enough, everyone listened.

Some people viewed the episode on accident, so I prayed so they won't die.

Well, he gave me a plush of Dr. PBS, but it got ripped for some reason. We both saw a silhouette of Pixu in his cat form. We both screamed and Robert just asked to do something else.

Also, Geoshea (yes, THAT Geoshea) tried to help me, too. But she got blasted 8 times, just like Pixu's dad. I took note of her getting blasted, but I didn't care, because she is a pedo and groomer. What surprised me was that Pixu was there, but I could not see him.

I also tried to develop more of my Roblox game to get my mind off Pixu, but there was one slight problem.

When I tried using Blender, Blender just crashed as soon as I imported a Roblox rig. The error just said 666. Pixu is god.

I just decided to watch Newgrounds instead.

I prepared by eating a bunch of McDonalds.

Can you guess who I saw on my computer? Yup, it was Pixu's dad, trying to warn me that I might die. Pixu killed him, and then he says this :

"There is no escape. Release me from hell or you'll DIE. Please."

I said, "NO! BAD KITTY! STAY IN HELL YOU FUCKING PIECE OF HORSE SHIT!"

Then Pixu just screamed horrifyingly and walked towards the entirety of the screen, with his face, and his tooth-filled mouth rotating, and he was glitching my whole screen. Because of that, I shit my pants. 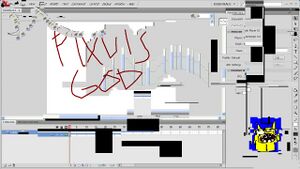 I smashed my computer today because of that. I will never forgive Pixu.

I smashed EVERYTHING that Pixu might possess. All of my tech : My smartfridge, my Switch, my Xbox, my very VERY expensive PS5, my phone, my camera, my iPod, my TV, all my CDs and DVDs and LaserDiscs and cartridges and Betamax tapes and VHS tapes, my DVD, VHS, Betamax, and LaserDisc players, Portable DVD Players, my old Nintendo consoles, and even my spare laptop.

Heck, I even destroyed my lights and oven.

I hope I survive! Wish me luck. 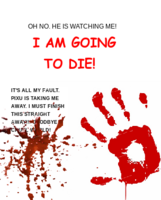 The picture of the last entry in the journal of undeadmule's experience of the episode.

OH NO. HE IS WATCHING ME! I AM GOING TO DIE! IT'S ALL MY FAULT. PIXU IS TAKING ME AWAY. I MUST FINISH THIS STRAIGHT AWAY!!! GOODBYE CRUEL WORLD!

This is a pretty weird journal. I have noticed that it is by that newgrounds user named undeadmule. I think I should put this on the Trollpasta Wiki. But I hope the Pixu's World video goes away

Haha, you fools. You thought I died? NO! I didn't. In fact, I shot that beast and he RAN AWAY! But weird shit is still going on! And no, I am not undeadmule, that's one of my old Newgrounds usernames! YOU JUST GOT TROLLED. You thought those blood stains were real?!? NO! THAT WAS JUST KETCHUP! And I did NOT destroy my technology or lights or oven. NOTHING has been destroyed. LOL!

But I have still seen Pixu lately. I've seen Pixu demolish my friend's house, so he had to get a new one. I hope he's alright. Pixu has still been killing people who accidetally watched it, ven though I prayed for them not to die.

I still cancelled Pixu's World so I can continue work on AlphNation, which I began in 2002.

The guy who made the fake pilot died recently,but no one cared so I flipped his grave off, both the middle finger and I flipped his tomb off because he caused people to die.

I haven't noticed that the guy made alternate versions of the seasons of the show, but luckily, I ended the show.

This is Aleph, signing off.

And no, I will not continue this blog. In fact, I think I should probably continue writing the script for the next episode of AlphNation by now. But before that I will upload this as a creepypasta to the Trollpasta Wiki because the events may seem cliche, and that my story has potential to be a creepypasta.

Pixu, after the animation of his true form, wakes up as his normal self, and it turns out he had a bad dream. His family and his friends were there, even YellowDragon. Pixu says, "Thank goodness I'm awake.", and the episode ends. Sadly, Disney declined it because it was "Too dark", so I fixed it up and instead sent it to Nickelodeon. They accepted it, and they started airing the show on April 3rd, 1998.

YEAH THIS ENDING DIDN'T EXIST AT ALL. SO YEAH, THIS IS POINTLESS. LOLFRHHEJDIO+586-5-7-kZUkdhtb vgHWdvdusohzfv

Retrieved from "https://trollpasta.com/w/index.php?title=Pixu%27s_World_-_Little_Baby_(Original)&oldid=274370"
Categories:
Cookies help us deliver our services. By using our services, you agree to our use of cookies.