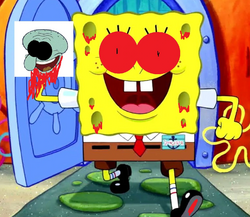 So, it was my normal Saturday, I had my popcorn ready cause I like popcorn. SpongeBob SquarePants, my favorite show was about to air. I grabbed my blanket and started to eat popcorn. the episode started with the intro, it was normal but at the flute part the flute notes were lowered. I was confused. the episode started with a red title card saying "ORDINARY" with a bloody font. it was a little off since SpongeBob was targeted for 5-9 year old. instead of showing who is director, who Is producer blah blah blah, it cut straight to the episode.

It was night, spongebob was watching television. he yawned so the couch flew him to the bed. "Goodnight Gary." spongebob said. "A Day Later." the time card guy said. he said it in a demonic voice! "Hi SpongeBob!' Patrick yelled. "You're next!" SpongeBob said in low, low, low demonic voice. SpongeBob jumped at Patrick and stabbed him in the forehead. I was scared to death. static appeard for 2 minutes. it cut to spongebob going to the krusty krab. "Spongbob, me boy!" mr krabs said happily. "Spongebob, wheres me money?!" mr krabs said again. "The money is right HERE!" Spongebob pulls out knife and stabs mr krabs and takes his head. "Squidward is next...."

SpongeBob knocked on squidwards door. "WHAT DO YOU WANT SPONGEBOB?"squidward said angry. "You're head...." Spongebob said. spongebob busted through the door and cut squidwards head off. "The Next- AAAAAAAAAAHHHHHHHHHHHHH!" You could hear stabbing noises when the time card guy screamed in fear.

SpongeBob came out of his house with bloody shoes. blood came out of his holes and blood was dripping from squidwards head. "The Best day ever..........." spongebob said. static came at the end. i was so scared i locked my door and windows.

banging was heard at the door. spongebob busted through the door and stabbed me! Its me spongebob writing this.... BAAHHAHAHAHA!

Retrieved from "https://trollpasta.com/w/index.php?title=Spongebob_SquarePants_Lost_Episode_-_%22Ordinary%22&oldid=247757"
Categories:
Hidden category:
Cookies help us deliver our services. By using our services, you agree to our use of cookies.