From Trollpasta Wiki
Jump to navigationJump to search
This is obviously my first creepypasta, and it kinda sucked, enjoy

I can't recall a moment, what have I watched?! This was a big insane nightmare. And after that nightmare, I'm not sure if I am able to animate at Nick anymore...

I came here, working as an animator of Nickelodeon Studios. But while I was finished animating SpongeBob's new episode, I came across something weird... It's a VHS tape with words written in red crayon, it's called "Squidward's Rampage" with words written in black marker saying, "DON'T WATCH IT, JUST DESTROY IT, PLEASE! -SH" SH stands for the creator of SpongeBob, Steven Hillenburg.

I immediately came home after working. While I was there I see a weird figure behind me. It was Squidward Tentacles, but he looks different, he had hyper realistic bloody eyes, blood covered on his shirt, Razer-sharp teeth, and a minigun literally pointing at me! I ignored it immediately and popped a VHS tape on a VHS player.

The title card appears with words colored in dark crimson red in a dark black background saying, "Squidward's Rampage". The episode begins with Squidward getting tired of Everyone's antics.. Squidward got up, saying in a demonic tone, "Why am I here? That never happened to me before! No, it was the audience that told me I stink... And I'm tired of it. I'm Squidward Tentacles, not a stupid idiot! I will kill all of the citizens of Bikini Bottom, and I'm not gonna end up. This is the way!" 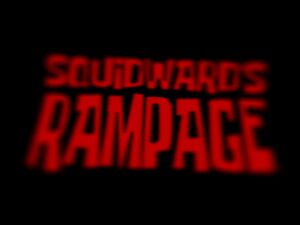 The title card for this episode

Squidward laughed Manically in a G-Major tone, I got scared too much that I screamed in fear. he walked to the bathroom entering the password to open the weapons, he got all of them.

My heart literally went down. When I screamed, Squidward is looking at me with Phantom eyes that looked exactly like the FNAF3 eyes! He spoke to me, "What's wrong, Jake? Afraid of the past?"

How did the VHS tape know my name is Jake? Sure SpongeBob came in the past, but still!

Squidward then kills SpongeBob and Patrick in the most realistic way possible. They died with Mega-realistic blood.

Squidward spoke to Mr. Krabs in a G-Major tone, "Well well well, is that the money making Mr. DAMN Krabs! You sure you're gonna FIRE ME?!"

The VHS tape has swearing, and he doesn't sound like Rodger Bumpass after all, he sounds like A monster! "Your soul is mine, Krabs!" Squidward said as he pulls out a Minigun looking at Krabs. "No, don't do it! You don't know what you were messing with!" Mr. Krabs said. Squidward said, "too late"

Squidward Tentacles kills Krabs 666 times, a time card appeared, saying "666 Times Later" but before the French narrator says Later, Squidward kills The French narrator, screaming like SpongeBob. Realistic blood pours at Mr. Krabs' corpse. Squidward kicks the door, killing all the citizens of the Bikini Bottom, even Spongebob's friends, including Mrs. Puff and Sandy Cheeks. As further inspection, Squidward Tentacles looks like an actual monster now! He then eats all of the citizens' with organs, bones, and hyper-realistic blood.

The crowd responded with a resounding "SQUIDWARD TENTACLES!" He smirked and the sky turns red and bloody, and the bloody hurricane appears, The hurricane is so hard it flooded The entire Bikini Bottom, and the scariest part? All of Squidwards died except one that jumped right out of my TV!

He's not looking like Squidward anymore, he looks like an ACTUAL GODDAMN SQUID, with a human mouth, human feet, and human hands. He breaks the VHS player and the tape itself. He's real! He said to me that "You have no right to be here or anyone else. You killed my father. Prepare to die."

I just terribly said, "I didn't kill your father you asshole!" Squidward killed me with all of the knives coming from all parts of my body. He then used an nuke gun and I said "well fuck" as I died from the nuke, destroying Earth as we know it. I woke up and it was a hideous nightmare!

Written by FT7
Content is available under CC BY-SA

Retrieved from "https://trollpasta.com/w/index.php?title=Squidward%27s_Rampage&oldid=274216"
Categories:
Hidden category:
Cookies help us deliver our services. By using our services, you agree to our use of cookies.