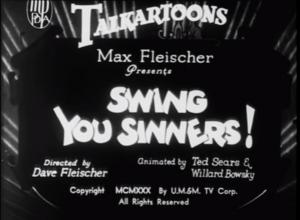 I love the work that the Fleischer Studios created, especially their series of cartoons called Talkartoons. They were so weird, silly, and sometimes even abstract. This is especially apparent in one of my favorites, Swing You Sinners. I'm sure you've heard of it. In it, Bimbo the Dog tries to steal a chicken, but gets stuck in a graveyard with inanimate objects attempting to make him pay for his sins. It becomes all-out madness at the very end.

Recently, I decided that I wanted to watch it again, but all the copies of the video had been removed from YouTube. I found that strange since the Talkartoons series is entirely in the public domain. There had to be a copy somewhere on YouTube. 5 pages back, I finally found a copy. It wasn't the best quality, but I could deal with that. Now, usually the cartoon is about 8 minutes long, but this copy was 10 and a half minutes long. I assumed that it repeated at the end or something, because I've seen people do that to copyrighted videos.

For the first few minutes, the cartoon was normal. No jump cuts, no odd things, nothing unusual happened. But when Bimbo got stuck in the graveyard, that was when things got weird. All the objects and ghosts and skeletons that were singing looked... more detailed. They were more wrinkly and their mouth movements were more twitchy than I remembered. And Bimbo had bruises when he got hurt. It really started to get worse when he entered the barn.

When the shadowy hand grabs Bimbo, there is an audible gagging sound, and when it swings at him, you can hear a slap and a whimper. Bimbo looked constantly horrified, he had the same expression on his face. The giant rooster that does a scat solo sounds more winded and raspy, and it moves it's legs more frantically. And now the footage began to look different. Bimbo shrieked, which he hadn't done originally, and ran to a small room, only to be rushed back out by a trumpet-playing ghost. Bimbo's underpants flew out and became another ghost.

"Brother, you're sure gonna get your face lifted!" said one ghost, holding a noose. He wrapped it around Bimbo's neck and pulled him up. Bimbo started choking and flailing around. He fell out of the noose, only for another ghost to say, "And a permanent shave!" The ghost was holding a straight razor. He swung it at Bimbo, who was gasping for air. The razor barely missed his neck and cut off a bit of his back and shoulder, causing Bimbo to cry out. Bimbo escapes the barn.

As usual, many faces pop out and tell him that when they're done with him, "there ain't gonna be no body". But their voices are very raspy and pitched down a lot. Bimbo is limping away for dear life, monsters right behind him. They are all trying to take a bite out of him. Bimbo runs into a cave, which is where the complete nonsense happens. Random creatures start dancing around as if they were rubber. Bimbo appears and flies around the screen. His head is chopped of by a butcher knife, which is supposed to happen in the cartoon, but he's supposed to grab it and put it back on. Instead, Bimbo starts bleeding profusely. He then is eaten by a giant skull, which is where the cartoon would end. However, it doesn't.

The screen fades to black, but it soon fades back. The sky is dark, and so is the ground. The trees are bent into odd shapes. Bimbo looks around. "Where am I?" he says. He looks frightened. "Hello?" he calls out. No response.

He runs around looking for any signs of life. Nothing. He seems to be the only living creature in this land. He is saddened by this fact. He sits down, looking lost and confused. "What is this?" he quietly says to himself. He stays still for about 30 seconds. A time card appears, saying "THREE DAYS LATER". When it cuts back, we see Bimbo lying in a fetal position. He looks disheveled. He has hair missing on his head and chest. He seems to have been ripping it out. He has bags under his bloodshot eyes, and his hat is missing. All of a sudden, he jumps to his feet and lets out a bloodcurdling shriek. He runs in circles on all four legs. He begins bawling and foaming at the mouth. He has gone completely insane. He pulls out one of his teeth and continuously slashing it across his chest. He bleeds intensely and his guts begin to fall out. He breathes heavily and starts eating them. He turns pale and lets out his final shriek before falling face down on the ground and dying.

I had nightmares for weeks after that disturbing cartoon. A few weeks later, the original versions were put back on YouTube, with no changes to them. However, I looked for the version that I had watched...

...but it was nowhere to be found.

Retrieved from "https://trollpasta.com/w/index.php?title=Swing_You_Sinners!&oldid=277027"
Categories:
Hidden category:
Cookies help us deliver our services. By using our services, you agree to our use of cookies.