In 2004, a group of 4 Men had performed an urban exploration inside of abandoned house in Wyoming. The house itself was rundown and desolate; the Men whilst exploring and venturing further into the building, had found a small videocassette.

The cassette was labeled as “Mouse funny!” written with a black marker poorly and almost rushed.

Once returning home, the men had put in the tape into an old cassette player. Now this is where the tape began.

It appeared to be a blurred out Mickey Mouse cartoon, not the type from 2004 or any of the modern cartoons that would have been broadcasted regularly, so it wasn’t a modern DVD. The image eventually cleared up and the title simply read “Mouse”. It then faded out and in to a less so blurred image of Mickey, a single, looping frame of Mickey just standing and starring blankly at the screen with detailed white eyes, pencil shading and lighting had been clearly applied to the eyes and greater detail scales were present, Mickey stared at the screen as it zoomed into his face, barley yet zooming to his face as he began to smile and his eyes began to widen.

A sound of a metal bell ringing began to loop every 6 seconds, Mickey stared and stared as his eyes began to bulge and separated from each other as his mouth curled to his ears and began to open as the zooming stopped and the Bells stopped as well, perfectly in sync with the stopping of the zooming in. As it stopped; it remained stopped for 3 seconds before the blur began to increase and what almost sounded like faint screaming began to play in the background, it began to zoom and additionally, The sound of metal scraping against a hard metallic floor, the screaming and the metallic sounds as mickeys face began to twitch rapidly as he as his smile stayed, his face overtook the screen as the screaming became one man’s screaming on a loop, a bloodcurdling scream of one Man, then Mickey ran off the screen.

Then there was darkness and silence. Nothing, the tape ejected itself.

About a year later, the fourth man who had reportedly collected and analyzed the tape was found dead inside a litter basket outside the same house and was reported covered in his own blood.

The other three men who were asked about the tape, two of them had refused to answer and would block all communication, they seemed to be fidgety and paranoid, another year later, John Franklin who was one of the men had sent in the tape to investigators for analyzation of the tape. It was deemed an obvious bootleg tape and not anything Disney would have been responsible for.

This still image was taken from a frame of the video. 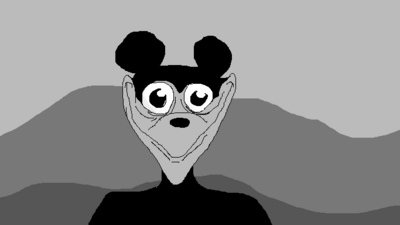 Credited to Man men me

Retrieved from "https://trollpasta.com/w/index.php?title=Funny_Mouse_Bootleg_Tape&oldid=274567"
Categories:
Hidden category:
Cookies help us deliver our services. By using our services, you agree to our use of cookies.