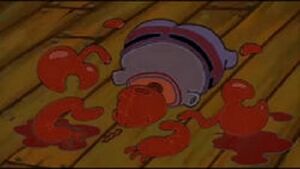 Back in 2009, I went to Blockbuster, and I was looking in one of the sections of the building, and then I found a VHS with the name Mr krabs suicide, I did not think much of it and thought it was just a joke name the employees had forgotten to get rid of, I went to the cashier, and the cashier said "Oh, that Spongebob one, you can just have it, you dont have to rent for it, its all yours." I was a bit confused, but it did not think much about it, I got into my car and drove home, I went into my living room, and put it in my VCR, and watched it, The theme song was normal, when it showed the title card it said Mr krabs' suicide and I said "so it wasn't a joke name?", I got scared a little bit but I watched it anyway,

then it cut to the inside of the Krusty krab, and everything was going normal, Until Bubble Bass came in and asked for a Krabby patty with extra pickles, So Spongebob made Him one, and he gave it to him, when he sat on a chair by a table to eat it he took the pickles out of the Krabby patty and ate them, and then came back to complain that his Krabby Patty did not have any pickles, And Mr krabs heard it, So he ran out of his office to Bubble bass who was holding in his dollar, And Mr krabs grabbed Bubble Bass' dollar and said to him that we will do anything to his drink, But Bubble Bass kept saying "No", and walked out of the building, and Mr krabs said "2 dollars! 2 dollars no!", and he started crying, and Spongebob and Squidward walked up to him, And Squidward said "Mr krabs, its just a stupid Dollar!", But Mr krabs kept crying, Then it cut to static for 2 minutes, and then it showed Mr krabs at his house sitting at his bed, he just sat there without blinking, Then he Grabbed a chainsaw and turned it on and stabbed it into his chest, and it then showed a image of His dead body on the ground, the screen stayed like that for 4 minutes, then it cut to a funeral for Mr krabs, and everyone was crying, including Plankton and Squidward, then it cut to the outro but the outro theme was reversed and then it ended, I was scared, now I keep it in a box in my VHS closet, never to be watched again.

Retrieved from "https://trollpasta.com/w/index.php?title=Mr_krabs%27_suicide&oldid=247675"
Categories:
Hidden category:
Cookies help us deliver our services. By using our services, you agree to our use of cookies.