It was a relaxing day at Nintendo of America. Everyone was busy translating new games and testing them. In this headquarters, there is Reggie Fils-Amie, who is the president of this company. Reggie wasn't working on a game or supervised anyone. Instead, he was busy playing Super Smash Bros on the Wii U with his good friend, Masahiro Sakurai. Reggie was using his overpowered Mii of himself, and Sakurai was playing as Luigi.

After two hours of gaming, Reggie has defeated Sakurai with a score of 200 – 21. Despite the fact that Sakurai knows the tricks of Super Smash Bros, his body wasn't ready for the sheer power of Reggie. After the 654th round, Reggie was getting bored. So, he head to his green room and ponder on what to do today. After all, it is almost the weekend. He took a peek in his checklist.

But what console should Reggie make? Should he make a console in competition to the giants of video games, Microsoft and Sony? After looking at images of video game consoles, he should make something for all gamers can play. He should combine the Xbox 360, the Playstation 3 and the Wii to make the ultimate console. It will be called the "WiiStation 360".

He plans to go to GameStop, but the nearest GameStop is 4 kilometers away, and the Reggiemoblie is unavailable due to that reckless Sonic the Hedgehog. Ever since Sega gave him a vehicle, he has been vehicular trouble. So, Reggie had to use an alternate choice of transportation...a bottle of Mountain Dew.

With one quick gulp, he drank it all. All two liters. The energy inside the soda charges his body, making it 200,000% ready. Then, he launches in the air, and flies to GameStop.

Because of his ludicrous speed, his arrival at GameStop results in him puncturing the roof and ceiling. Luckily, nobody was hurt. The employees were surprised that the President of Nintendo of America would arrive in such a utmost way. One employee said, "Mr. Reggie! Such a surprise to see you."

Reggie walked up to the employee, and booms, "I WOULD LIKE TO BUY A XBOX 360 AND A PLAYSTATION 3!" The employee was nearly deafened by his booming voice. A random Nintendo fan came up to Reggie and asks, "Mr. Reggie, when will Mother 3-" Reggie turns around promptly, and look at the fan deep in the eyes. "FOOL. NOBODY CAN WITHSTAND THE POWER OF MOTHER 3." The employee interrupts his booming speech, and said, "You're Xbox 360 and PlayStation 3 is here." Reggie looks at him. His voice turns back to normal. "Okay, thank you." The employee said, "That will be $432." Immediately after he said that, Reggie was gone. And the Xbox 360 and PlayStation was gone as well. The employee was shocked, "Oh, shit. I'm so fired."

Reggie runs back home, so he can start the project. He arrives to his garage, and grabs the Wii, Xbox 360 and PlayStation. He grabs some duct tape, and prepares making his creation.

For several days, he works 24/7. The details on the construction of the project cannot be written in words. He keeps on calling Nintendo HQ that he is sick with Pokérus. 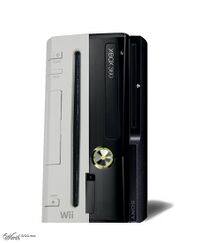 Finally, after 33 days of nonstop work, the WiiStation 360 was complete. This console has the ability to play Xbox 360 games, PlayStation 3 games (And PlayStation 2 and PSOne games) and Wii games. It was the perfect console for any game. 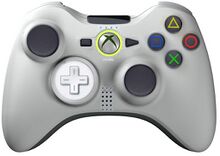 Reggie didn't know what to do with the WiiStation 360. Should he show it to the headquarters? He thought for a bit, but then, he heard that E3 is in two hours. So, he puts the WiiStation 360 in a box, and runs to the convention.

With the remaining energy from the Mountain Dew, he heads to the convention before the announcer calls the arrival of Reggie.

"Please put your hands together for Reggie Fils-Amie!"

The audience applauded the arrival of Reggie. He clears his throat, and said his monologue.

"Good evening. When you play a video game, there are three things you want on your console. Power, beauty and innovation. There are many consoles that have each of these keys. The power of the PlayStation, the beauty of the Xbox, and the innovation of the Wii. And now, there's a console that has all three. This console is perfect for anyone."

He places the box, which had the WIiStation 360, on a table.

He pulls out the WiiStation 360 from the box, and a wave of an applause happens.

Reggie then showed the game that comes with the WiiStation 360, Mario Goes To UNSC.

After E3, Reggie releases the WiiStation 360 to the public. Everyone loved it. IGN rated the game Mario Goes To UNSC a 9.5/10 for "Awesome game, beautiful graphics, but it does not have mr. Chief as a playable character."

Written by TheToaMaster
Content is available under CC BY-SA

Retrieved from "https://trollpasta.com/w/index.php?title=Reggie_Makes_a_WiiStation_360&oldid=274095"
Categories:
Hidden category:
Cookies help us deliver our services. By using our services, you agree to our use of cookies.