The Princess Is Not In Another Castle 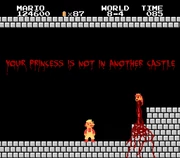 I always was a fan of old videogames, it reminds me of my childhood, Sonic, PacMan, Bomberman, and especially Super Mario. Super Mario's is a fun platform game that I really love especially when you hop on top of the monsters and getting a power up mushroom.

One day, I was really bored so I thought of downloading an emulator and thought of playing Super Mario, so I downloaded an emulator and Super Mario rom and played it on my Computer. It reminded me of my childhood, I started up just fine, defeating monsters, breaking blocks, getting all the powerups I can, it was pretty boring, I remember people loved to hack games like these and add some great and hilarious codes and mods so I tried searching one on google, I came across this one rom on google.

It was on a forum, I can't remember what forum it is but then again, when you're downloading a random game you don't really care about what website you got it.

Anywho, I downloaded the rom, the descriptions were "Download at your own risk", the comments said is was a great game and was nicely done so I downloaded it with hesitation.

The download was finished when my mom came up my room to tell me to join them on visiting my grandparents so I switched off the computer.

My parents wanted to sleep there for the night but I didn't want to because I was really curious about the rom so I insisted that I'll go home by myself.

I got home, I opened the lights and I walked into my room, changed clothes and opened the computer. It booted slowly because it was old, and so I waited.

When it finished loading, I quickly opened the emulator and loaded the rom, I was pretty excited to know what this rom is full of. ( A thing that I will regret later )

The Rom loaded up fine, I was at the menu screen of the game, but the weird part is, the title was covered in blood and the background is somehow distorted. But I didn't really cared, and thought that it was just a part of the mod the modder did and so I started a New Game.

The Game started weird, Mario fell down from the sky and died and a faint scream could be heard from the game, then it restarts, losing a life. This time, Mario automatically appeared at the side of the screen like how he normally does.

But what's even more weird is that he was walking slowly unlike in the normal games it was fast and slippery. I never really cared, I still think it was a fun joke of the modder. I came up to the bricks, I remember you were supposed to encounter a mushroom monster here but there were none, I thought it was great, so I decided to just break the bricks and get the powerup, but when I hit the powerup, it changed intk a brick and got destroyed.

"What the fuck?" I said, I was surprised it happened and felt bad that I didn't get the powerup, so I just continued on, I jumped on the pipe, but to my surprise the monsters were dead, a sprite of them is stuck at the ground and is covered in a pool of blood, when you make Mario walk in them, Mario will leave footsteps of blood and will make a soft "gasp" sound.

It was starting to get creepy but I still continued on, I was really kinda amazed and creeped out of the modded rom.

As I continued on, I realized all the bricks and powerups are destroyrd even the secret powerup bricks. Also, the same thing happened to the monsters, they are all dead covered with blood pools, every time Mario walks in them I get a slight chill.

Then I got to the part where you'll enter the castle, I entered it but it was alot creepier than expected, I thought the game would be normal now but no, the background sound got more creepier and distorted, Mario is now covered in blood and you can hear him cry in the background.

I am still shocked at this and thinks how the modder did this but I was starting to get creeped out, there were no monsters or anything, they were turned into ghosts, a sprite of a ghost, a blanket-like ghost with a face that flies all over the stage and will chase you when you get near them.

I got caught once and Mario lets out a horrifying scream which gave me goosebumps, that's when I knew this was not a joke anymore, this is some fucked up rom made my a fucked up modder, how could they say this was a great one. But I was curious so I didnt quit it, I continued, I got caught so many times and everytime Mario screams my hearts stops.

When I made it out, I got to Browser, but browser was dead, he is stabbed with a sword on his back and is covered in a pool of blood. Mario walks into him and will make a crying sound, this goes on for a minute, Mario crying over a dead body of his enemy. I don't know what is happening but I just sat there staring.

The screen turned black and when it got back, Mario is back but the dead body is gone. The creepy background noise is still there too, then a text came up "Your Princess is not in another castle" I was shocked, I know that phrase, it was from that annoying little bastard named Toad who keeps on telling me that the Princess is in another castle.

But this time why is he saying that she is not in another castle? Does this mean she is in here?

I continued the game and walked to the next stage where I saw there, the dead body of Princess Peach hanging on the ceiling of the stage and a knife stabbed to her chest. The sprite wasn't really bad, you can see here eyes covered in fear, blood is dripping from her hands and feet, her gloves are covered in blood and her head is dripping with blood. It was horrifying, and then Mario had to scream again, it was so creepy. The screen turned black and a devilish picture of the toad came up that says "Your Princess is not in another castle" the picture looks like an art, he was wearing a mushroom costume, his shirt was ripped off, he was holding a knife and Princess Peach on his other hand.

Then the screen turned black, the lights went out, I thought it was just a power failure but the screen turned on, The emulator is on a full screen, there a horrifying set of images turned in, a picture of a dead woman covered in blood hanging from a ceiling with her eyes fixed on the screen and it looks like she was looking at me. I was so scared I got up to the door, but the door was locked!

I yelled and cried for help but no one could here me, and then I heard a voice, it said "No one will help you, this isn't a game anymore. You will die!" I turned my back and saw the screen changed into Toad's bloody head, it was so realistic, the eyes are bleeding and his face looks old and creepy. The mouth was even moving while speaking.

I was really scared I fell down to my knees, then my VLC player opened up and played a video, it was a man killing my mom, it wasn't really my mom but it looked like her. The man grab her, stabbed her in the back, cutted off her head and arms and then sliced open her stomach, the camera apparently focused upon the opened stomach, I puked on the floor, you can see the instestines, liver, everything and it's full of blood.

Then the camera turned up to the man who was holding the head up, the head was dripping with blood and the face of the woman was horrifying, you can still see the fear on her eyes and the tears, and her mouth was widely open due to the fact that she was screaming while getting killed. I puked again.

"Stop this!" I yelled, and got up on my knees, I cried. Then the camera turned to the killers face, he was laughing and said "Game Over".

I screamed and grabbed my phone. I called my parents, but to my surprise, it wasn't them who answered it was the police, they told me that my parents got into an accident and didn't made it.

I dropped my phone. I cried as I hear the man laughing on the video on my screen. I threw my computer off the floor and sat at the corner, traumatized at the things I saw that morning. I passed out.

When I woke up, the door was open and a note was beside me, I read it and it said:

"Thank you for playing the game, did you enjoy it?

The Princess Is Not In Another Castle,

Retrieved from "https://trollpasta.com/w/index.php?title=The_Princess_Is_Not_In_Another_Castle&oldid=246779"
Categories:
Hidden category:
Cookies help us deliver our services. By using our services, you agree to our use of cookies.